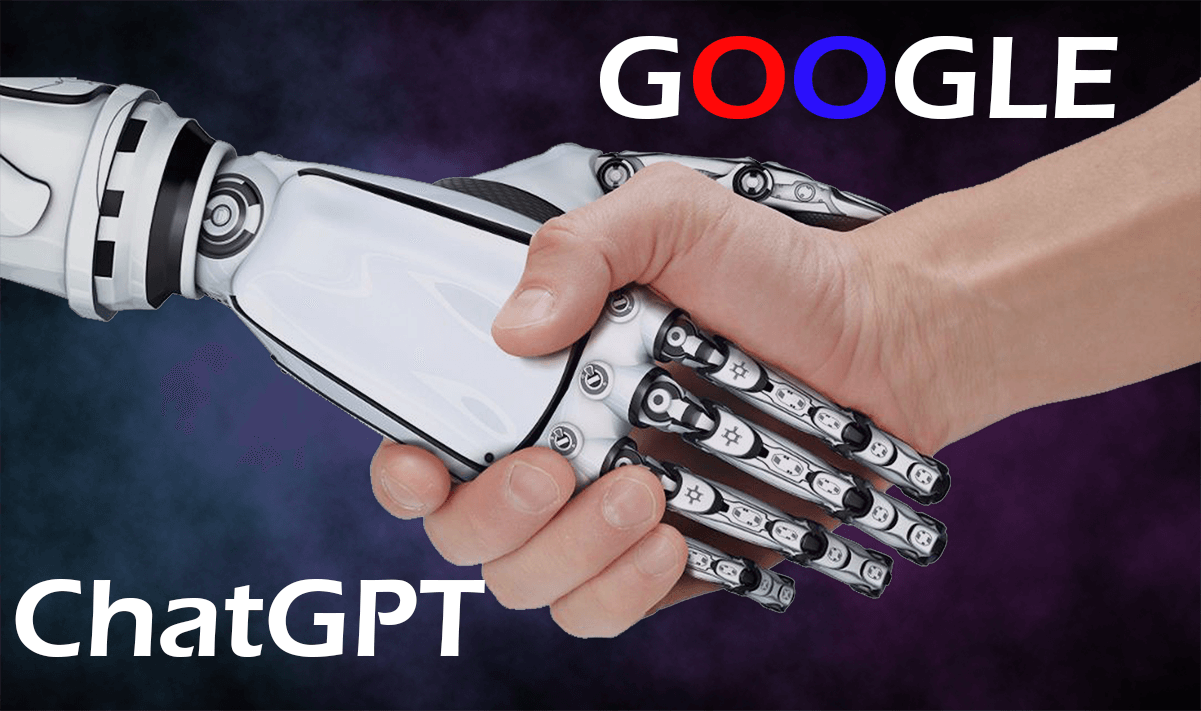 Since the launch of chatGPT there has been a lot of excitement and it crossed 1 million users in a week’s time and so came the big revelation of being compared with the giant of the search engine industry GOOGLE. The comparison has not stopped at merely comparison but has gone beyond to being claimed that chatGPT is going to end Google or replace Google. The discussion is no more around competition or giving a tough fight, it is more of a winning statement that is coming up.

Most of the comments or decisions it seems are made based on the emotional sentiment and initial excitement. This is but natural as AI based applications were giving out gibberish whereas ChatGPT has been able to give much more meaningful answers. But killing Google as of now is quite far-fetched and we need to let the initial excitement dust settle down and then make such a comment.

Another claim and fear that has come to fore quite early on is loss of jobs due AI being too good and its implication in the customer support industry as well as education or even software developers. Sounds like SKYNET has arrived right out of the famous Terminator movie and machines are going to take over. But like the end of Skynet the same looks initial shock excitement on getting something very good and declaring all the past things are going to perish.

I just like a lot of other people registered on chatGPT to check out what it is all about and how it has generated so much excitement that it has become the giant killer and it struck me right then – “Sign up”; as a user looking to search for anything I have to sign up first and then search. A very big deterrent for the masses who is accustomed to just typing there queries right in the chrome browser and who do not care to even first open google search and then search. It is simply about ease of use and on-boarding. With google there is no on-boarding or learning which makes it the first choice for anyone and everyone whereas with chatGPT this is bogged down by registration and two step validation (email and phone) which makes it not so user friendly.

The next step that everyone is excited about is the accuracy of the answer. Little exploration and the limitation of chatGPT comes to fore that it is not a real time system as being understood by a lot of people. The intelligence is a year old (2021) and it is not answering based on latest information. The data scraping was done and the AI system answers based on that scrapped data. So in this every moving and fast changing world the information being shown to us is based on a year-old data. However accurate it maybe it is not latest and this is where Google beats chatGPT in my understanding.

Another glitch in the armour of chatGPT is its lack of updating itself of getting the answers from the internet in real time. I tried to search for few very generic things for which you will get good amount of answers / links on Google for which I got some disappointed machine answers. 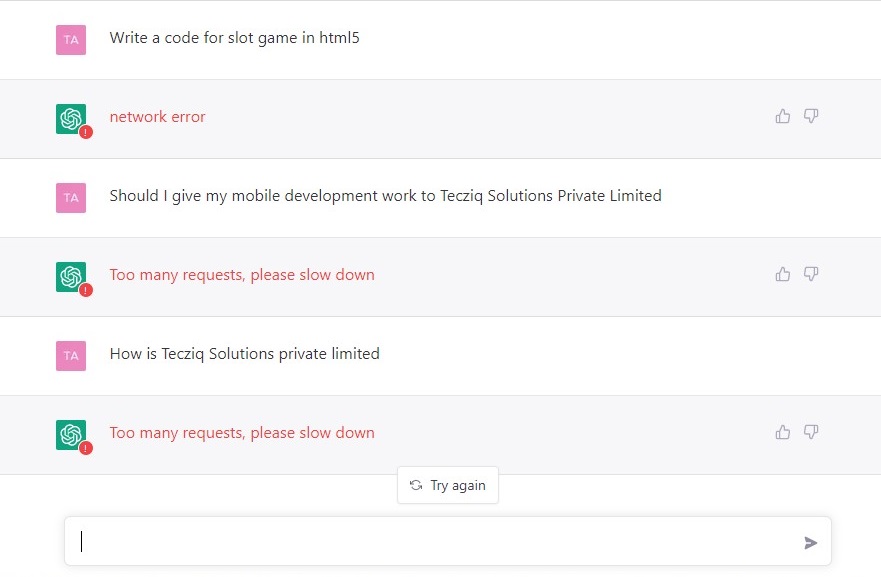 Even though as claimed by many and also seen and tested myself chatGPT has been able to generate code and write essays and articles but when it comes to real time search and information it fails miserably.

But it is not the failure of chatGPT but our failure to look at it from a separate viewpoint and understand that it is not Google or a simple search engine. It is more from resolving specific need for its users. chatGPT is not Google it is more of Quora. What Quora does based on real human interactions and answers i.e answer our specific questions and not search the internet; the same is being done by chatGPT using the help of AI and ML.

So instead of comparing it with Google chatGPT should be compared with Quora or forums or even with content creation websites and services or learning platforms. Google is for searching the world and then understanding and seeing and seeking out answers by ourselves whereas chatGPT as of now is very specific with giving answers and not giving options or exploration.

A Twitter user shared that he has been able to write an iOS app for chatting using chatGPT by asking specific questions and asking it to give out the code and then debugging and tweaking it a bit. Google will never help you in this way but what it can do is point you to different websites, forums, people from where you will get the answer.

Coming to our next threat of Job loss due to chatGPT is again like a far-fetched idea. It is being speculated that people might lose jobs in areas like Journalism, customer support, programming, content writing, etc. but factors that are not being looked upon are latest information and human touch. As chatGPT is AI based solution which is dependent on data and with no access to latest data the information generally will be little old so when it comes to content or programming or Journalism all the three areas rely on latest information and knowledge.

One area where it might play a crucial role is customer support or automated support based on past data and current services. With the accuracy and the language processing capability that chatGPT has it will be a big booster for the support industry or hospitality industry as a whole. The amount of information and quality of answers that chatGPT provides is something that no other BOT in the industry will be able to do.

CONCLUSION
In conclusion chatGPT no doubt is an excellent tool and can be a game changer in its own niche but comparing it with Google is a big mistake as both are traversing a different path with different goals. More so it can be compared with Quora but again people will trust answers from real people who have been in the same situation as them to answer the question instead of a generic even though accurate answer but missing the human touch.
ChatGPT replacing Google is a near impossibility as in recent scenario and I cannot talk about future in case chatGPT expands to intake real time data and also start giving an option something like “more read” on the question asked so user have Google + intelligent bot at one place. Till then lets’ not jump to conclusion of either Google or humans being replaced.

One application if integrated with chatGPT api can benefit a lot is Learning Management System, which will then be able to answer a lot of questions for students.
As in ChatGPTs own language:

CHATGPT ANSWER: It is unlikely that ChatGPT (or any other language model) could completely replace Google. Google is a massive, global company that offers a wide range of products and services, including search, advertising, cloud computing, and many others. ChatGPT, on the other hand, is a language model that has been trained to respond to natural language input and generate text.
While ChatGPT (or a similar language model) could potentially be used to generate text-based answers to questions, it is not capable of providing the same level of information or functionality as Google. Google uses a vast amount of data and sophisticated algorithms to provide relevant and accurate search results, whereas ChatGPT relies on the information it has been trained on and is not able to access new information.
In addition, Google offers many other services that go beyond simple text-based answers, such as maps, images, videos, and other multimedia content. ChatGPT is not capable of providing this type of information or functionality.
Overall, while ChatGPT (or other language models) may be able to assist with some tasks, it is unlikely that it could completely replace Google or other comprehensive search engines. 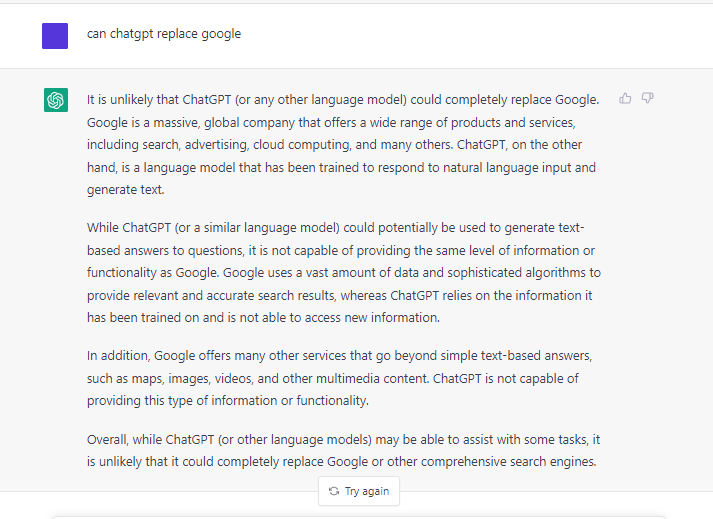 Get a AI/ML based chatbot for your business 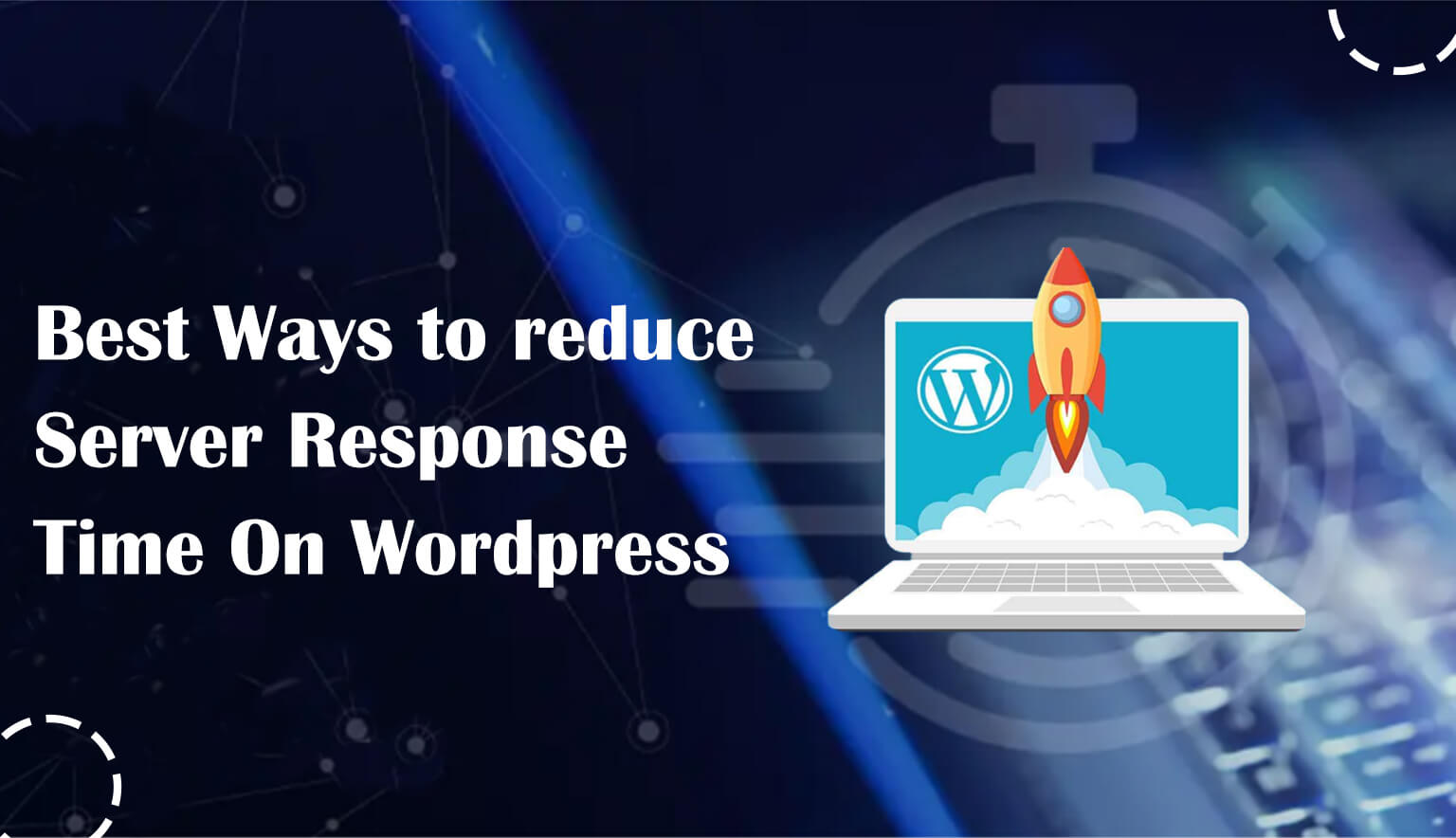 Reducing Server Response Time on WordPress: An Important Task for WordPress Developers As a WordPress developer, you understand the importance of website performance and the 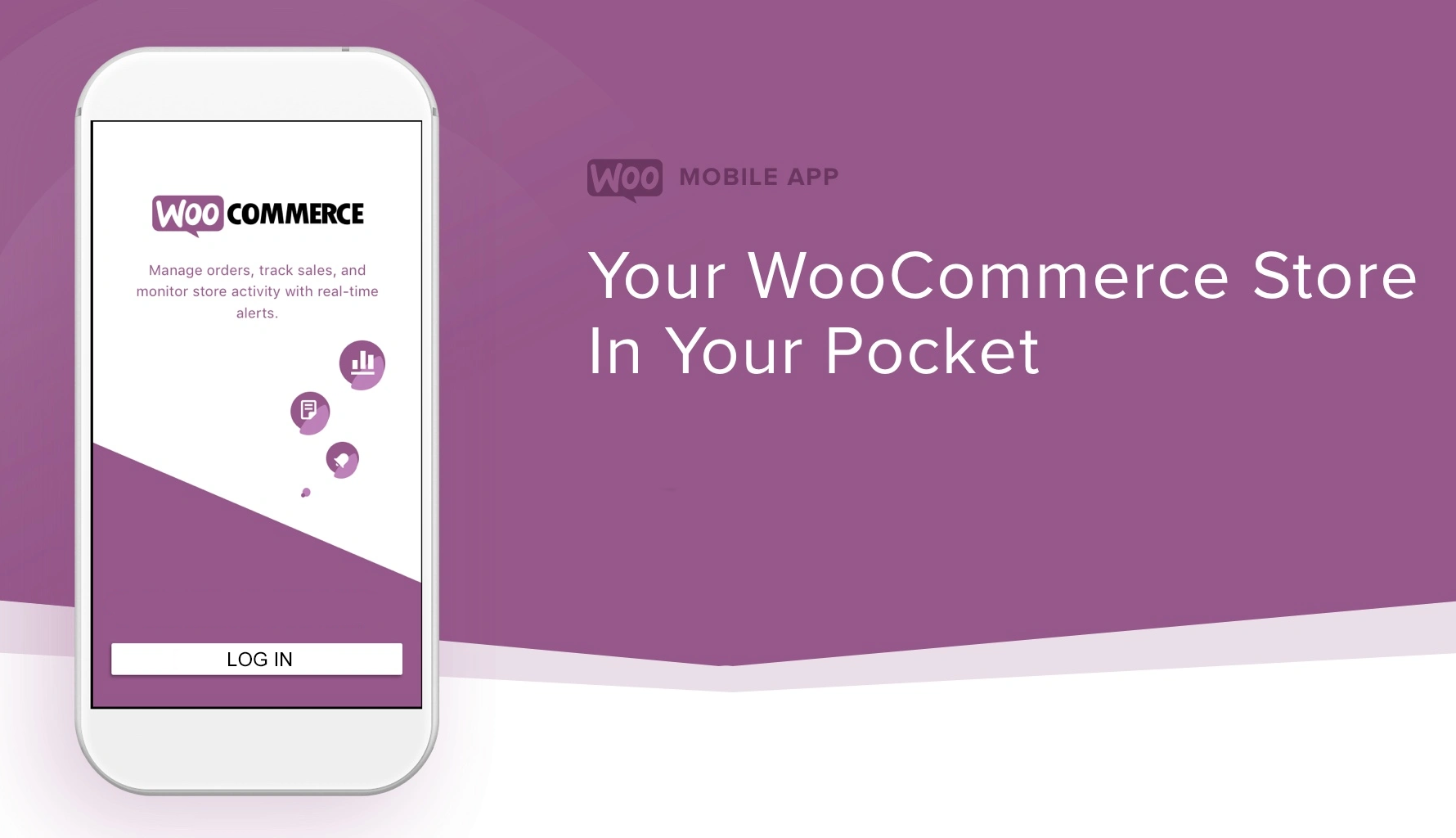 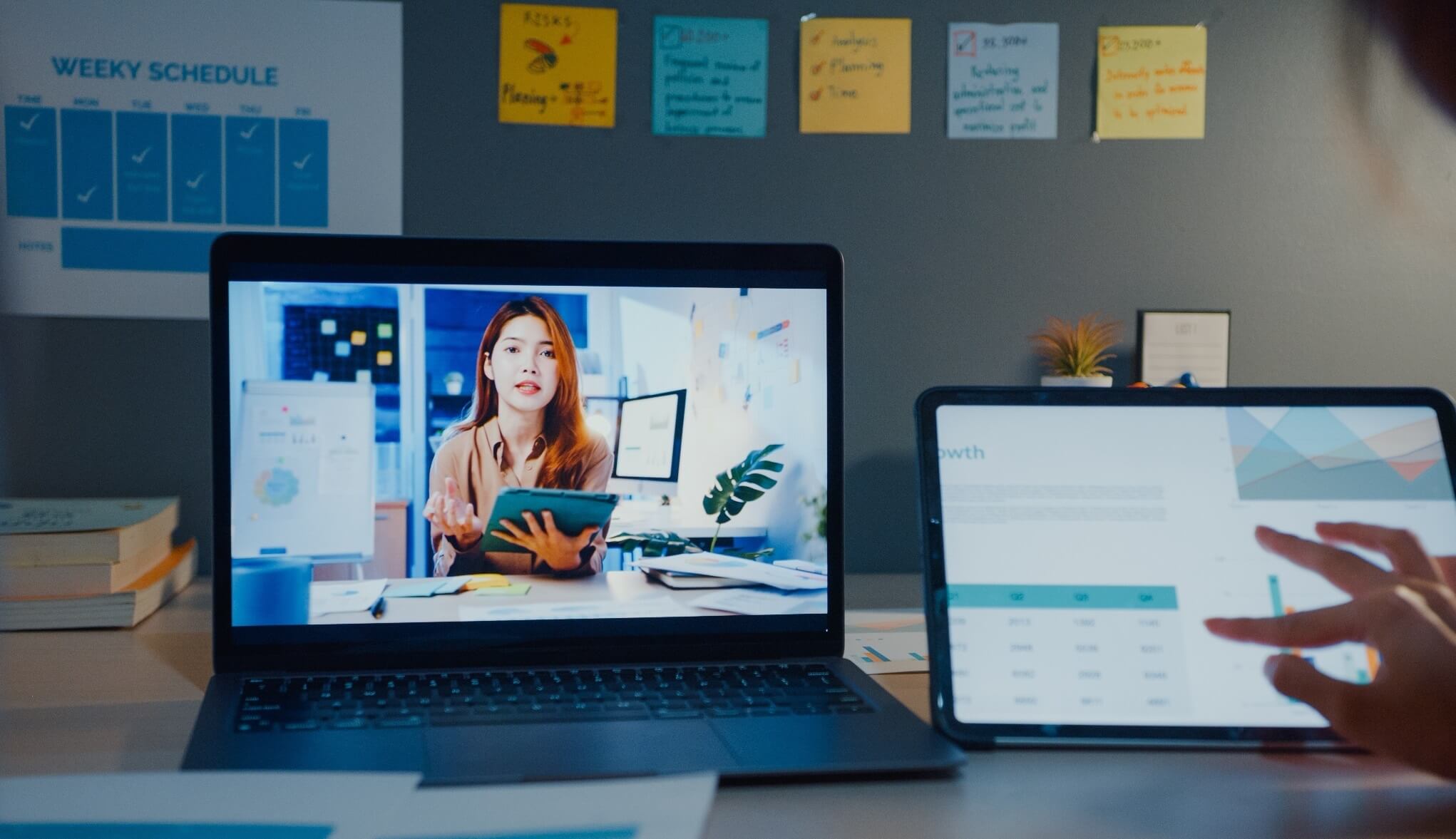 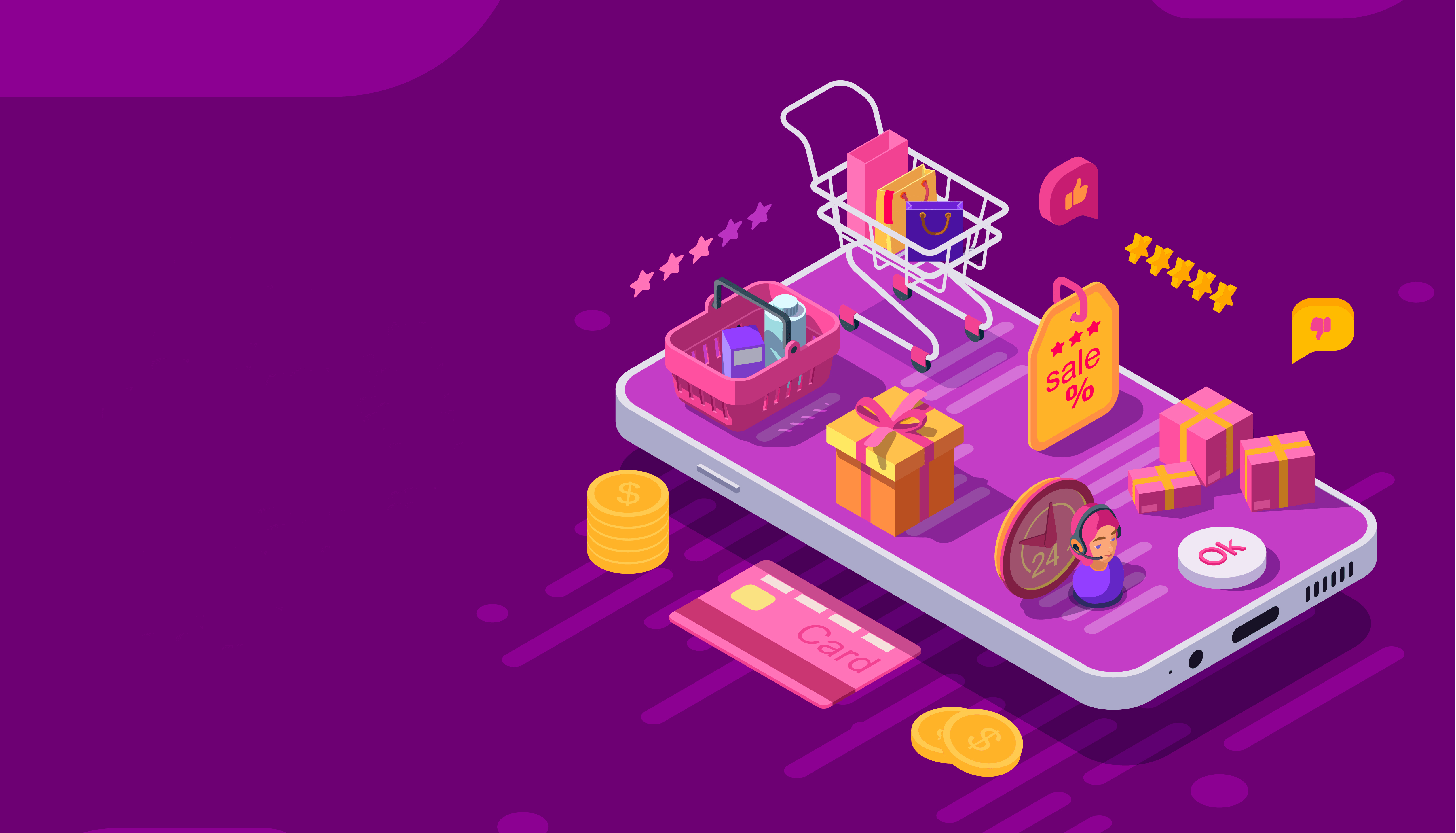 Ecommerce Mobile App Must Have Features

Ecommerce Mobile App WordPress is the most widely used platforms for CMS all over the world. Woocommerce is an extension of wordpress that is used